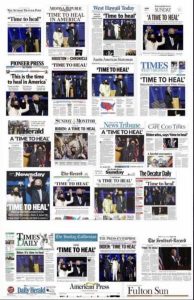 ust two months ago, I noted that Justice Bader Ginsburg’s passing was going to be a game changer in the 2020 presidential race.

Since then, a succession of events has occurred that would make a roller coaster ride pale in comparison.

Election Day on November 3 came and went. While the late evening of the very same day showed a substantial Republican surge and a Trump lead in battleground states, voter tallies painted a very different picture the next morning.

Joe Biden was in the lead and most of the mainstream media rushed to call the race a Democrat win.
A number of pundits and left-wing politicos urged Donald Trump to concede, while the totals in some states hadn’t been officially tallied yet. (Recounts are under way as we speak.)

Many clues pointed to some kind of counting error—and quite possibly even to massive voter fraud.

Having closely followed the presidential campaigns of both candidates and witnessed the huge gap in popular enthusiasm between Trump and Biden, I couldn’t reconcile the official results with the people’s pulse on the ground.

Since then, several things have happened.

On the Dem side, the calls for Trump to concede have multiplied. Dems promptly created a Biden “transition team”, which reportedly already made calls to a number of world leaders. (The astute reader will remember that such a call prompted the arrest of Gen. Michael Flynn in early 2017, but he was a member of Trump’s administration and the mainstream media did not bat an eyelid.)

Breaking with tradition (again), ex-president Obama repeatedly called for Trump to concede, even though a groundswell was building up that will likely overturn the results of the election in several states when the full extent of the fraud is revealed.

After years of calling Trump’s presidency “illegitimate” on account of a fictional collusion with Russia; after a bogus impeachment based on a phony whistleblower; after four years of yelling “not my president” and comparing Trump to a number of Nazi criminals (from Hitler himself to Goebbels), the Dems and the mainstream media (redundancy alert!) have acted on cue to roll out a “Time to Heal” campaign.

The idea is to sweep all partisan animosity under the rug and play a big happy family from here on down.

Sadly, even far-left elements of the Dem party are pushing back against this drive, as they oppose any negotiation with Republicans and even fantasize about establishing a Truth and Reconciliation Commission to apportion blame and mete out justice for the “crimes” purportedly committed by the Trump administration.

The pro-Trump website TGP has published a collage of newspaper headlines containing the urgent message “Time to Heal”, which is being pushed by the Dems and has been enthusiastically accepted by a non-discerning media.

The wonders of a free press!

Meanwhile, the outcome of the presidential election is still in flux. Down-ballot, the much-touted “blue wave” has failed to materialize and the Dems have lost House seats and failed to gain control of the Senate.

But stay tuned. It ain’t over yet.