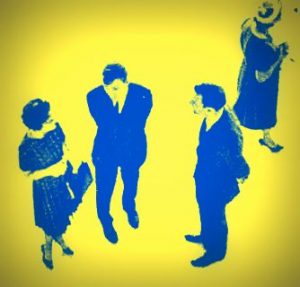 Proxemics, as one definition goes, is the study of spatial distances between individuals in different cultures and situations.

Students of cultural anthropology and non-verbal communication will recall the foundational contribution made by Edward T. Hall in this area, in particular by his book The Hidden Dimension (1966), which deals with the “language of space” in different cultures.

Hall posited that there is a direct correlation between social standings and physical distances between people.

He went on to divide the distance we keep from other individuals into 4 zones, namely Public Space (roughly 4 to 8 meters), Social Space (1.5 to 4 meters), Personal Space (0.5 to 1.5 meters) , and finally Intimate Space (from physical contact to 0.5 meters). These zones serve as a mere indication as they are affected by cultural codes and other factors.

It’s a known fact that gender, status, ethnicity, and social situation will influence distances in each zone.

But all that was settled science until the Spring of 2020.

The Covid-19 pandemic has now redrawn our social boundaries. Possibly for the first time in history, our spaces have been redrafted by legislators and are enforced by law.

Entering an office-building elevator, boarding a subway train, stopping for a chat with a neighbor while walking our dog used to be actions governed by what Hall called our “distance regulators.”
Now there’s a new, added factor that falls under the heading of safety.

How safe do I feel by standing here?

This pandemic will eventually fade away but our new proxemics is likely to stay on.