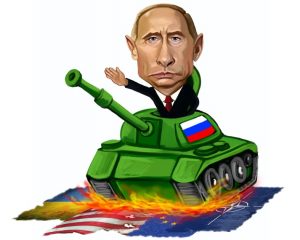 The month of September comes to a close but not without another heinous Russian war crime: a humanitarian aid convoy in the Zaporizhzhya region of Ukraine was attacked by Russian missile artillery and devastated, with the loss of at least 25 civilians.

But Russia doesn’t even care about its own losses, which are expected to go sky high after the recent mobilization, which basically amounts to railroading random civilians and dumping them on the frontlines.

The sham referendums in the occupied regions have been wrapped up. For those who thought the whole effort was a tragic farce, now there’s even video evidence to that effect. But Russia doesn’t care if the rest of the world shakes its head at Putin’s in-your-face hypocrisy. In his calculus, the bogus referendums were needed to justify the annexation of those regions. Once annexed, they’re Russia, and any Ukrainian attack is to be regarded as a violation of Russia’s borders. Hence, it’s time for Moscow to once again rattle its shopworn saber and break out the nukes (if some corrupt big-hat military honcho hasn’t already sold them for personal profit.)

The coming fall and winter will show whether the rest of the world will find the strength to call Putin’s bluff.

I remember that just a few weeks ago they were even advocating nuclear strikes on London, while now that they witness the destruction of the Russian military and the rising popular rejection of the “partial” mobilization, they appear resigned and uncharacteristically deflated—which for monumental gasbags is no mean feat.