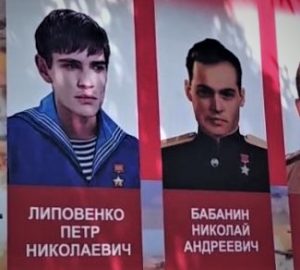 The conflict in Ukraine is being fought not only on the Lysychansk ridge or in the marshy south near Kherson. While the pace of the shooting war has slowed down somewhat, the communication skirmish between Ukraine and Russia is still fiercely on.

An all-out effort is underway from both sides to bolster the resolve of their citizens and send a defiant message to the enemy. In this, the victims of Putin’s aggression are head and shoulders ahead.

Ukraine’s ace in the hole is President Zelenskyy himself, who uses the Internet to send a daily update to his people that has proved very effective in reinforcing the country’s fledgling national identity.

One is reminded of the extremely popular “fireside chats” given on the radio by President Franklin D. Roosevelt before and during WW2.

While Volodymyr Zelensky was a successful actor until he became Ukraine’s President in 2019, his Russian counterpart, Putin, is a stodgy communicator who still believes that utter lies told forcefully and with a fixed frown are a winner. Moscow’s Foreign Minister, Sergey Lavrov, uses the same technique, and so does of late Dmitry Medvedev, Putin’s sidekick. Old habits die hard, but I’m sure the above gents are careful to avoid upstaging Putin by sporting a more nuanced style of communication.

The communication war is largely fought on social media platforms. Here again, the daily dose of videos from the Ukrainian Armed Forces is vastly superior to the plodding stuff posted by the Russians, who often resort to stock footage and staged ‘firefights’, not to mention the poor image quality.

The Ukrainians have even managed to make a cult object of the Turkish drones that were the scourge of the ‘Z’ armored forces in the failed march on Kyiv. The TB2 Bayraktars even have a catchy folk tune dedicated to them.

Also, there is a patriotic folk song with much older roots that is often featured in many frontline videos. It’s called Hej, Sokoly. Its origins are debated. Some say it comes from Poland, others swear it’s Ukrainian. The fact remains that it’s very popular in Poland, Ukraine, and even Slovakia, and it’s gotten a new lease on life since the Russian invasion, er, the special military operation.

To shift the social-media appeal 90/10 in favor of Ukraine (having been illegally attacked and invaded is unfortunately not quite enough), another haunting 150-year-old patriotic song massively captures hearts in favor of the defenders. It’s Chervona Kalyna. There are several versions of it, but possibly the most popular one is the recent recording made by Ukrainian pop singer Andriy Khlyvnyuk accompanied by none other than Pink Floyd, and which has racked up over ten million views.

Finally, a few days ago, I came across a goofy attempt by the Russians to spin a stinging defeat into the modern equivalent of the famous Battle of Thermopylae 2,500 years ago. I kid you not.

On the first day of the invasion, several squads of Russian paratroopers landed by helicopter on Hostomel Airport, a facility located just outside Kyiv and owned by Ukrainian aerospace firm Antonov.

The operation was almost immediately in jeopardy when the Ukrainian conscripts defending the airport opened fire on the helicopters with their Igla man-portable missile launchers and downed 6 of them. During the ensuing night, the Ukrainians managed to get reinforcements on site and launched a counterattack that all but wiped out the rest of the 200 Russian troopers. In order to deny the Russians the use of the airport to land supply planes, the Ukrainians then blew up the runways and eventually retreated into the capital city to defend it against the land attack that famously fizzled.

Now the Russians have concocted a legend whereby their brave paras defeated the defenders’ overwhelming numbers and held the airport for a month, while losing a large number of heroes in the process.

There’s a video accompanied by a clumsy ‘chanson de geste’ (lyrics by a certain Sergey Yefimov, a Kremlin-linked spin doctor) that purports to celebrate this totally bogus feat. While some of the footage does show Russian paras running on an airport tarmac, no actual firefights can be seen.
When the Ukrainian troops swooped in by night and started mopping up the remnants of the Russian force, it’s safe to assume the invaders had other more pressing concerns than shooting war videos and mugging for the cameras.

This did not stop the ham-handed makers of this video from concocting a full-size legend, which centers on three Russian soldiers hailed as heroes of the motherland and is eagerly endorsed on video and newsprint by Aleksander Kotz, a shameless scribe writing for the Komsomolskaya Pravda tabloid, which regularly peddles Kremlin-sourced tall stories.

It actually reminds one of the historic fabrication known as Panfilov’s Twenty-Eight, which dates back to the early defense of Moscow in November 1941. In order to boost the morale of both the Russian population and the embattled troops, the red Army invented a full-size battle in which these 28 soldiers were said to have stopped the German advance. The general in command of the unit went by the name of Ivan Panfilov but he did not participate in this action.

Probably because it never happened.

The bogus narrative celebrates the fierce resistance put up by these soldiers who repelled a German infantry attack supported by 54 Panzers. The heroic twenty-eight men all died, but not before destroying 18 enemy tanks and inflicting a whopping 800 casualties on the Germans. Hyperbole much?

In 1942, a war correspondent from the Army’s official rag Red Star (Krasnaya Zvezda) picked up this story, which was nothing but rear-echelon hearsay. Still, the Soviet propaganda machine quickly turned it into a stirring legend and even supported it with a detailed list of the fallen.

Years later, a Red Army investigation exposed a number of gaping holes in the narrative (no German record of such a clash was ever found, some of the “fallen heroes” had died on other dates and in different places. Six were actually alive—thank you very much—and one had actually defected to the other side.)

In 2015, the final word on this mess came from the Director of the Russian Archives, who called the story “a myth.”

But it was a myth instantly championed by Stalin (and later by Brezhnev) and several monuments had already popped up around the USSR to commemorate a glorious feat of arms that never took place.

The present-day Legend of the Hostomel Paras is in good company.

Another example of shameless Russian buffoonery is a recent celebration of two Heroes of the USSR spotted in Lugansk. A patriotic poster erected by the local pro-Russian administration shows several heroes of the Great Patriotic War (which is what Russians call WWII).

Unable to find actual portraits that looked heroic enough, the authorities had the airbrushed effigies of US stars Ashton Kutcher and Johnny Depp photoshopped on period uniforms. The surviving relatives of Petr Lipovenko (Kutscher) and Nikolay Babanin (Depp) were not amused.

You can’t make this stuff up—but the Russians and their stooges can.