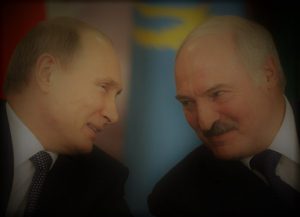 Let’s face it, the war in Ukraine is nothing short of tragic. Yet, as is the case in most human-made catastrophes, there’s an element of ridicule that is worth mentioning.

It’s the role of Belarus, a country of 10 million people with a GDP that’s slightly higher than that of neighboring Ukraine and nearby Moldova. Or such it was until Putin’s war.

In the extended prelude to the invasion of Ukraine, Belarus’s dictator, Alexander Lukashenko, chose sides and predictably supported Russia, his main trading partner.

Lukashenko thought he’d “do a Mussolini” and earn his country a seat at the winners’ table. He, as well as his partner in crime, thought the war would be a cakewalk and Ukraine would crumble faster than France did in 1940.

Most of his countrymen were not supportive of his decision, but Lukashenko has been a tyrant in Minsk since 1994 and couldn’t care less. Indeed, it is believed that many Belarusians joined the Ukrainian army against Russia and a well-organized Belarusian resistance movement disrupted the rail transportation effort that was supposed to ferry Moscow’s troops and matériel into Ukraine.

That was back in February 2022. In early May, with Moscow’s troops stuck in a war of attrition, the hulking autocrat went as far as to admit in an interview with AP that the war had ‘dragged on’.

Lukashenko’s understatement betrays his nervousness. His country was doing not so bad before his move, but it now stands to suffer the consequences of a Russian defeat on top of the sanctions he’s already incurred for being Putin’s useful idiot.

Like Mussolini, the Belarusian dictator thought he could ride his cohort’s coattails to victory, but he bet on the wrong horse. His recent “military exercises” on the Ukrainian border are just a face-saving ruse, as there’s no way he’ll make a run for Kiev. Putin’s much-touted military juggernaut got beaten hollow by the Ukrainians and Belarus wouldn’t stand a chance against them.

So here’s another example of a tin-pot dictator dragging his country to ruin thinking he could bluff his way to victory while holding poor cards. By the time the war ends, Russia will be poorer in resources and will have to pay war damages. Not much of a well-off trading partner any more.

Both Putin and Lukashenko will have made a disastrous miscalculation (besides conspiring to invade a sovereign country) that may well mark the end of their autocratic regimes.

It would be funny, if it were not for the Belarusian people who never had a say in the matter.

On the other side of the border, most Russians still seem to support this criminal “military operation” and will reap the whirlwind before too long.