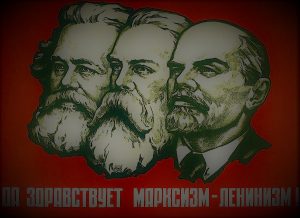 The only communication totalitarian states are capable of is nothing but oafish propaganda, devoid as it is of any attempt at refinement or subtlety.
It’s like knocking on a door with a 50-ton tank, if you’ll forgive the all-too-current imagery.
I’m of course talking about Russia and China, strange bedfellows who share a common political DNA. The former was borne out of the ashes of the Soviet Union, which in turn was created by a bloody revolution a century ago. The latter is the end product of the Chinese civil war in the 1940s, which produced the People’s Republic of China (PRC).
For 50 years, the USSR and the PRC shared the same emblem, the hammer and sickle on a red background. With the collapse of the USSR in 1991, the workers’ symbology was shelved but remained deeply ingrained in a part of the Russian population.
Today, China engages in genocide and denies it. It develops a killer virus but gaslights the whole world by pushing improbable theories as to its origins. For a while, the CCP (China’s Communist Party) blamed the US Army, then it was Italy’s turn. The latest iteration of China’s lame disinformation campaign cottoned on to reports of deer-to-human transmission in North America.
All these crackpot theories were enthusiastically pushed by an army of brain-dead “influencers” who spewed out the party line verbatim (both on the Uyghur genocide and the Wuhan virus) on their web channels. Sadly, some of these wu-mao shills are western people who happily peddle the CCP’s disinformation du jour for a handful of yuan.
As for Russia, Vladimir Putin—the current Czar—can count on a massive propaganda machine made of news agencies and newspapers which are only too happy to propagate Putin’s drivel. It’s a known fact that investigative journalists and those who don’t toe the party line in Russia often meet with unfortunate and fatal accidents.
A few days before the invasion of Ukraine, a government-run outlet called RIA Novosti ran a piece by court jester Petr Akopov under the heading The Advance of Russia and the New World. In his swollen prose, Akopov referred to the implosion of the USSR as a “tragedy” and went on to say,

“Russia is restoring its unity – the tragedy of 1991, this terrible catastrophe of our history, its unnatural dislocation, has been overcome.”

This is rather at odds with Putin’s own contention that his foray into Ukraine was just a “special military operation.”
At any rate, when someone at RIA realized that the war in Ukraine was far from over, the story was deleted.

But whatever trash China or Russia run on the web, it lasts forever.