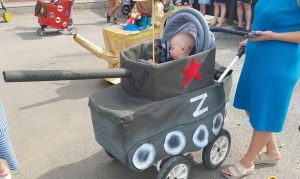 We are all aware of the crimes against humanity committed by Russia during its unwarranted and illegal invasion of Ukraine. Most of us have been horrified at the harsh imagery of civilians gunned down on city streets, the contents of their shopping bags strewn all over the pavement. We have witnessed the grim discovery of mass graves in Bucha and elsewhere, we’ve read about the forced deportation of Ukrainian civilians to remote areas of Eastern Russia.

It would be fair to say that the genocide being perpetrated by Russia is a ghastly reality—and that the much-overrated UN is actually powerless to stop it. It’s 1938 all over again.

If this were not enough, however, there is another, stealthy genocide taking place in Ukraine at the hands of the same perpetrators. It’s the willful extermination of minority recruits from far-away parts of the Russian Federation (RF) sent to their deaths with inadequate training and grossly unsatisfactory equipment.

Most of the human resources thrown into the meat grinder of the Ukraine invasion come from poor and illiterate communities of the RF, not from the big cities . And it’s not a random occurrence, either, but a deliberate choice. These people don’t have a voice in today’s Russia and the mainstream media—that grotesque propaganda circus that befuddles the already unsophisticated Russian public—will never reveal their tragedy.

All it takes to grasp the magnitude of this stealthy genocide is to examine the data for the main “catchment areas” where the RF draws its cannon fodder from. Then you cross this data with the number of combat deaths by area of origin and you’ll realize the most penalized communities are the Dagestanis, the Tyvans and the Buryats.
Dagestan is situated in the northern Caucasus and borders the Caspian Sea to the east. Tyvans come from south-central Siberia,while Buryats inhabit a region situated further east, along the eastern shore of Lake Baikal.

If Putin’s actions affecting the Ukrainians were not repulsive enough, this one is another egregious crime against humanity he will have to answer for.

Photo: A patriotic Russian mother participates in a contest for the most creative baby stroller in Sudogda, a town located between Moscow and Nizhny Novgorod. She probably thought her effort was for a good cause (and therein lies the problem.) The term “useful idiots” was invented in Russia for a good reason.